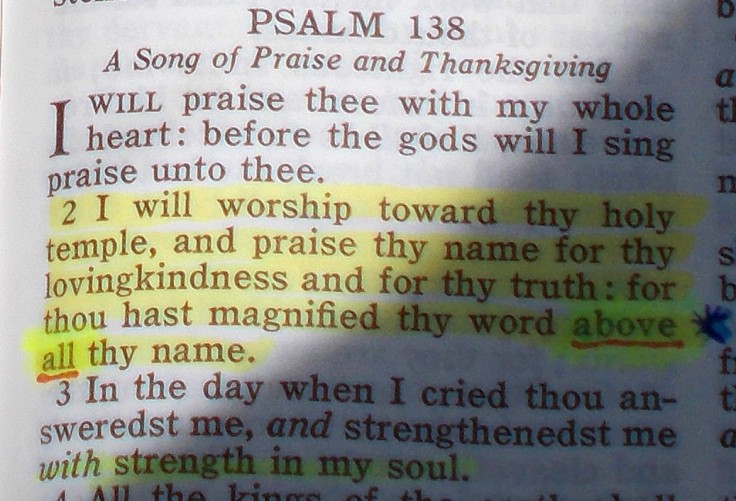 There are groups of dedicated believers who teach that a translation, specifically the King James Version, is Inspired. Yet, the Bible does not teach that Inspiration applies to a Translation. Of all the good that should be said of the King James Bible, and so much can, it was not Inspired.

So, can the KJV be revised or improved?

I do not believe the KJV will ever be improved. It is as good as we will ever see in an accurate, beautiful, and complete Translation from the perfectly Preserved Textus Receptus and the Masoretic Text.

Because, the conditions required for such a task to be faithfully completed are virtually impossible to imagine in our current spiritual age.

For one thing, we will never see another group assembled with the qualifications of those men who Translated the KJV. Never.

Nor will we ever see a group who understood the value of the Textus Receptus and the Masoretic Text as those men did.

Nor will we ever see a group of men assembled that held to the Theological standards and respect for the specific words of God that those men did.

So, all the discussion about re-doing, re-making, improving and otherwise changing the KJV for the better is an exercise in futility. Seriously. We have passed the age where such a group of men will ever exist again.

(Unfortunately, the New King James is not an improvement. Just to be clear. But that is a topic for a much deeper discussion than we can go into at this time.)

Which brings me to my conclusion for these posts on Preservation.

A Corrupt Foundation = A Corrupt Structure

The simple fact is, if one does not understand and accept these basic doctrines of Preservation, then he is in serious jeopardy when it comes to knowing what God’s word truly is.

Most will not even listen to these truths anymore. They reject the whole idea of Perfect- Word Preservation. The reason for that rejection is that they are afraid if it is true, they must admit to currently preaching and teaching from a corrupted Bible. A Bible which is based on a corrupt text and translated by men who were more interpreters than faithful translators. Who have given us a host of Bible commentaries rather than accurate translations.

Most will never do a thorough comparison between their new translations and the King James Bible to see how pervasive the differences are. And how many doctrines truly are affected.

And the differences are significant.

This means that there is strong resistance to our standing upon and elevating the specific words of the Bible. Because, as the resistance understands, if a Bible cannot be trusted in every specific word, then everything we believe is up for grabs.

Which is precisely the place where the church has arrived. We are now on the threshold of a major shift in the life of the church. Because, the Bibles popularly used are not based on verbal, plenary Inspiration.

Regardless of the solid doctrinal beliefs professed by those that use them.

Regardless of the deep devotion and spiritual life of believers that read them.

This shifting sand upon which the popular church stands is moving under their feet. Leaders in the mainstream are introducing doctrines right now into the Evangelical church which will be virtually impossible to refute for the simple reason that words are no longer critical.

Ideas and general truths have taken precedence over the words of God.

Growing up in a Mainline Protestant home, and being very active in my United Methodist Church as a young man, I was able to see some things that the Evangelical and the Fundamentalist often miss. Specifically, that the leadership within the Mainline churches overwhelmingly does not support the inerrant, literal view of scripture. And that they are more than happy to see the biblical foundation crumble within the Evangelical and Fundamental camps.

Because, strange as it may seem, the Mainline leaders understand that the words of the Bible are the foundation of saving faith. That the words of God are the authority that condemns the false religious leaders of the world. And without those words of God to convict them, they can pursue whatever spiritual direction they choose.

Those who have only known the Evangelical or Fundamental environment, are often unable to see the true nature of spiritual corruption that flows from the Mainline churches. And have, consequently, let down their guard in defending the words that are the great dividing line between the kingdom of light and the kingdom of darkness.

Defending “Thought Inspiration” is an exercise in futility. One is not able to defend a thought or doctrine or anything else if the words underlying those thoughts have not been established and settled by God.

Without those words being perfectly preserved, we have no authority to preach the gospel of Christ to the watching world.

We are reduced to simply arguing for our good ideas against theirs.

“But the word of the Lord endureth for ever. And this is the word which by the gospel is preached unto you.”” (I Peter 1:25)