In Memory of Scout 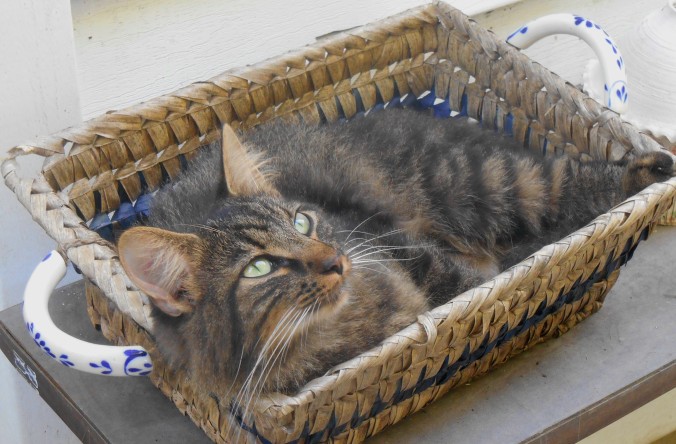 “For we know that the whole creation groaneth and travaileth in pain together until now.”  (Romans 8; 18 – 23)

This morning we lost one of our cats. Just as I was getting ready for work, my wife called me to come outside. A car had been going too fast and hit our cat, Scout, trying to cross the street. He died within moments after stumbling back into our yard.

We had Scout for about a year or two. He was born in our garage during the summer. We didn’t even know that he and his other 4 siblings were alive for about 3 weeks after the fact. Misty, the mother, had hidden them way down under a big wooden work bench at the back of the garage. It was only after going into the garage one day to find something that I saw this little fuzz ball staring up at me from behind a pile of junk. And then, one by one, all the others began peering out at me from all different areas!

During work today, I was thinking a lot about Scout. And that led me to think about how much we love our little friends. How they become such an important part of our lives. We are very thankful for the blessing we had to care for this small creature, even if the time seemed short.

So, I have this hope that one day we will see all our little friend in Heaven. Yes, I know the scriptures say that their spirit goes back the earth. But God can do anything. I would just really love to see Scout and all the little creatures we have known someday in the world to come.

And this made me think of how Adam and Eve must have enjoyed a very special relationship with the animals in Eden. There was no fear or animosity between animals and man at that time. And Adam, possessing a great mind along with his understanding of the animals, gave them each names that were totally appropriate and accurate (Genesis 2:19,20). Today, we have the Animal Kingdom designations such as Kingdom, Phylum, etc. But Adam constructed his own amazing system with those original names.

And something else interesting occurred in Eden that is worth considering. When Satan tempted Eve, he appeared in the form of a serpent. Apparently, at this time, the serpent was able to walk. Only after the Fall did God curse the serpent and make it to slither around like the snakes we see today.

But, do you realize that the serpent, possessed by Satan, was able to talk? Did Eve not find this just a little bit out of the ordinary? Wouldn’t she have been tipped off that something was wrong or strange if the serpent did not normally talk? Wouldn’t it be more logical that Satan would have used something familiar to Eve to tempt her? Not something weird or unusual. That usually puts us on alert.

So, what if all the animals could talk in Eden? Maybe not all talking the same language. But at least Adam and Eve could have understood whatever bird or monkey lingo was being spoken. Not even sure what chaotic nonsense monkeys would have to say. Imagine if Rosetta Stone, the language software company, could market animal languages!

I am not trying to start some weird doctrine here; just thinking about the possibilities.

Our society has a longing to get closer to animals. This can also be linked to our general desire to “get back to nature” in all its forms. We long for a deeper closeness to animals that is very limited in this world.

So where does this longing come from? Could it be that we lost this when Adam and Eve sinned?

After the Fall, God cursed the ground and the whole universe fell under the curse. Consider that for a moment. The entire universe shuddered and cracked when man sinned. That is staggering.

At that point, man’s relationship with animals and nature changed. Animals began to fear man and to run from him. The animals, once designed to eat vegetation, may have had latent characteristics that would now be expressed by carnivorous appetites. Fangs originally used to rip bamboo and fruit, would now be used to eat smaller living prey. For Adam and Eve, that perfect relationship to the created world was lost.

So, maybe the whole Doctor Doolittle fantasy isn’t so far fetched. Maybe we lost the ability to commune with the animals. And we have felt the loss ever since.

Our hope and joy is that one day, all Creation will be made new. God will create a new Heaven and a New Earth.

All Creation waits for that day when all of the animals and all the created universe will be made new to never experience pain or death again!

2 thoughts on “In Memory of Scout”